Market segmentation and targeting is probably the hardest concept in marketing. Strangely once understood even the savviest marketers seem to flip-flop in their marketing execution.

For those dear readers who followed the 2016 US Presidential election the map below (Source : Philip Bump, Washington Post,Donald Trump spent more time in the states that handed him the presidency) visually explains the point. 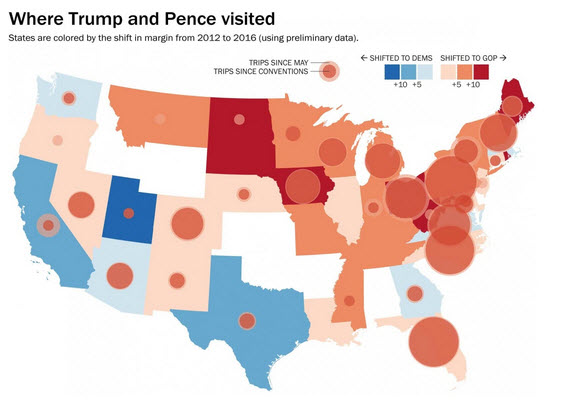 Ask anyone familiar with the 2016 US election- the answer will be unanimous!

Q. Why did Trump not campaign in California in 2016?

A. Because the Trump Campaign did not see a way to win the majority vote in California. US Presidential elections are based on electoral votes, and all the electoral votes of the state (e.g. California) are won by the candidate who wins the popular or public vote. (See Electoral College)

In the US Presidential election, the point is to win the majority of the public vote at the state level. If you win the majority – you get "all" the electoral votes of the state. The idea of "winner take all".

If you think back to the 2016 US Presidential Election, the Trump campaign focused efforts on states that were possible to win (e.g. Pennsylvania, Michigan, Wisconsin)  and involved less time in travel. This saving in travel time is huge because air travel from New York to California takes six hours while Pennsylvania might be just an hour. It frees up the campaign to focus on places where there was a "chance to win".

In any market, once you identify customers you might be "likely" to win the rest of marketing can follow easily . These include sharpening your product offering (in elections this could be what the candidate promises) and your advertising including reaching people through traditional and digital marketing.

The most difficult part of segmentation and targeting is the discipline of being able to stop trying in markets where there is little chance of success. Thus the Trump campaign was disciplined enough not to waste too much time or resources in California in 2016.

"Giving up" a market at the planning stage seems to be a huge challenge. Once the marketer is able to decide which markets to not focus  on, segmentation, targeting and later marketing can be a great success.