The recent US Tax changes, increasing the standard deduction has caused alarm in the non-profit community. Some experts  believe that donations will decline from $ 309 Billion  in 2016 by upto $20 Billion.  This as  people will stop donating since cannot itemize their taxes from 2018. Thus, during year end 2017  there was a great deal of popular advise to folks to donate to their favorite causes and take a deduction in 2017. It is expected that the 30% US tax payers who itemize will decline to 10-5%  for 2018. An accounting and tax view for 2018 can be been on accountingweb. 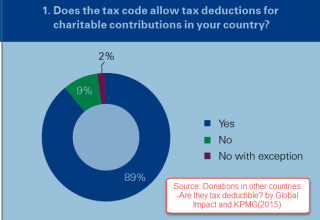 The world does provide tax incentives for charity donations as this 2015 study by Global Impact and KPMG suggests. The graphic from the KPMG study that was conducted in 43 countries shows that 89% offer some sort of tax benefits for charity donations. Understanding the motivations of the three entities Donors,Charities and Governments is interesting and here are some thoughts:

Donors: Donors have all kinds of motivations and tax saving is only one small part of it. Within the category of people who are motivated to give for tax savings there are large differences nationally. On one hand , in eastern cultures including Japan and Taiwan people are more sensitive to tax benefits. In western cultures like UK and US people are less inclined to be motivated by tax benefits. The poorer folks in these countries sometimes don't know about itemized deductions.  Surprisingly the very rich do not  care about  the limit to what they can deduct. Here is a  quote from Warren Buffet  in David Joulfaian:

Charities: Charities exist because Governments are unable to do many human services for the less fortunate. Charity workers tend to be highly motivated for their cause and in most cases are able to make a difference to the people they serve. The origin of tax deductions for charity was to try and motivate high tax paying folks to save some taxes through large donations. This was at a time that high incomes attracted 67% plus taxes.

Governments: Governments need taxes to provide capital intensive services like roads and infrastructure. Worldwide Governments are realizing that the masses are not looking for the tax deduction before deciding to donate.The masses care about jobs and disposable income and would happily donate without looking for a tax break if they had the money. Thus for example, in India the tax deduction has been reduced to 50% of the donated amount when the tax base is just 1% of the population.

All in all, the worst estimates for US donation decline is from $309 Billion to $289Billion under the 2018 tax law.This is the $20 Billion for 20% of tax payers who are expected to go for the standard deduction instead of itemized returns. There were about 150 Million US individual tax returns filed in 2016. For 2018 year let's say 30 million will take the standard deduction and might give $20 billion less to charity. That works out to under $700 per  person.

Charities need to reach out to their donor base and better explain what they do and the impact they have.  We believe that the US donor will come through with donations right across the rich-poor spectrum. If the economy continues to do well we are likely to see a rise in receipts at Charities that is not itemized at all! [Disclaimer: We do not claim expertise in tax law or accounting. Our dear readers and charities are encouraged to discuss tax related matters with their tax accountants ]