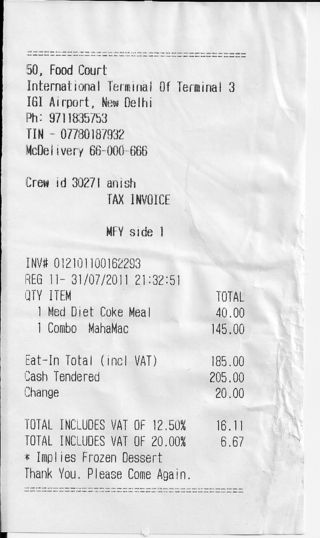 The Combo Chicken MahaMac with a small fries and drink  cost Rs. 185.00 ( I think it was on special and the full price  was closer to Rs. 225) which I had on my return from a great India trip  while experiencing  the India boom first hand. The BigMac Index is a great measure of purchasing power parity and since I had'nt had the Chicken MahaMac , short for "Mahararaja Mac"at MacDonald's India – I took the opportunity at the swanky Terminal 3 of Delhi Airport and the receipt is presented alongside. Here are a couple of  observations of the scenario at the food court where the MacDonald is situated:

A McChicken meal in the US costs between $6-7  and that works out to a purchasing power  parity of closer to Rs. 30 to a US $ than the Rs. 20  to a $ estimated here compared to the official exchange rate of Rs. 44 to a dollar. In other words despite rising real costs, no signs of demand slowing in booming  India.