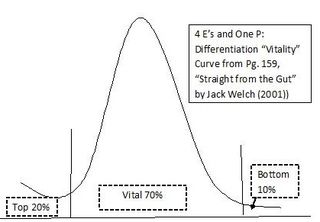 Microsoft employees and the market are celebrating the exit of Steve Balmer and hopefully the exit of the much hated employee "stack rank" system at Microsoft which must be at least partly to blame for Balmer and Microsoft's troubles. Since the stack-rank Microsoft style of employee ranking is after all a bell-curve, like Jack Welch GE performance evaluation system pictured alongside, the question is: Why does a bell-shaped ranking of employee performance  seem to work at GE and not at  Microsoft?. Here are some thoughts:

All these things happen in a flat organization where roles,responsibilities,reporting and deliverables are crystal clear and understood at the manager and team level. Incidentally, the appraisal system promotes innovation and team work.Now consider the Microsoft stack-rank, conducted in a multi-layered organization:

As teachers from elementary school to Universities and graduate programs know, most students are willing to put up with a heavy work load and any hard grading, that the teacher comes up with. However, no student is willing to put up with grading ( again a bell curve)  where the grading process and criteria are not perceived to be clear, transparent and fair to all students in the class.

It is quite amazing that many large companies including Microsoft, seem so reluctant to tell each employee exactly how they are doing and how they can improve. By avoiding candor, not only is the bottom 10% devastated but the middle 70% does not want to take any risk and innovate.Microsoft's lackluster innovation output points to exactly this situation. Contact StratoServe.