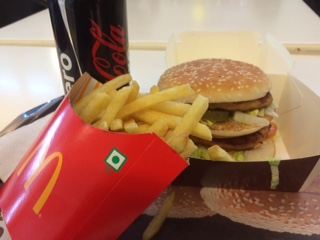 swanky Indira Gandhi International Airport and the meal and bill is pictured. Prices have risen  from Rs. 225 to Rs. 295 or about 6% a year from 2011 somewhat less than the average inflation of 7%. See the earlier post India trip: How much does the Chicken MahaMac cost in 2011?).

What has not changed is the significant larger crowd at the McDonald compared to the other eateries at the Food court. Clearly McDonald’s is popular among travelers at the terminal. The Chicken MahaMac is the equivalent of the Big Mac that is made popular by the Big Mac Index of The Economist.

The last week has seen some further dip in the Indian Rupee but then the oil crash, foreign exchange outflow based on Chinese slowdown and general nervousness with emerging markets are also  listed as factors.

On the ground though, the Indian economy did not show any signs of slowing down as internal demand continues to rise as does the adoption of technology by the predominantly young country. One evidence was the nonchalance with which the young cashier accepted my credit card compared to the cash transaction of 2011.About StratoServe Digital Marketing Services.

India trip: How much does the Chicken MahaMac cost in July 2011? – See more at: http://www.stratoserve.com/2011/08/india-trip-how-much-does-the-.html#sthash.zFLIprl6.dpuf