The US charitable giving season corresponds to the Thanksgiving-New Year period and now is a great time to start preparing for the 2014 giving season. With about 1.5 Million non-profts – think of any social cause- and there are hundreds if not thousands of charities operating in that space offering stiff competition for donor dollars. This post is about motivations of High Net Worth individuals in giving and digital marketing clues that non-profits can use. But first a re-cap of academic research on donor motivation.

A recent literature review by Bekkers and Weipking (2011) lists 8 motivations of charitable giving based on prior research. These motivations are in no particular order and the authors suggest that several of these mechanisms might work together. The mechanisms include: (1) awareness of need i.e. the donor must know that a need exists (2) Solicitation or asking for donations (3) Costs and benefits to the donor- for eg. preferred seating at college football games (4) Altruism or the motivation to do good (5) Reputation of the donor among peers (6) Psychological benefits – for example the "joy of giving" (7) Values like making the world a better place (8) Efficacy or the knowledge that the donation made a difference.

These sound like a  lot- so what should Non-Profits focus on for this Giving Season?

A good place to start is the 2012 Bank of America Study of High Net Worth Philanthropy done in collaboration witth the Center of Philanthropy at Indiana University. High Net Worth (HNW) is defined as people with over $ 1 million in assets (excluding their home) and incomes over $200,000. 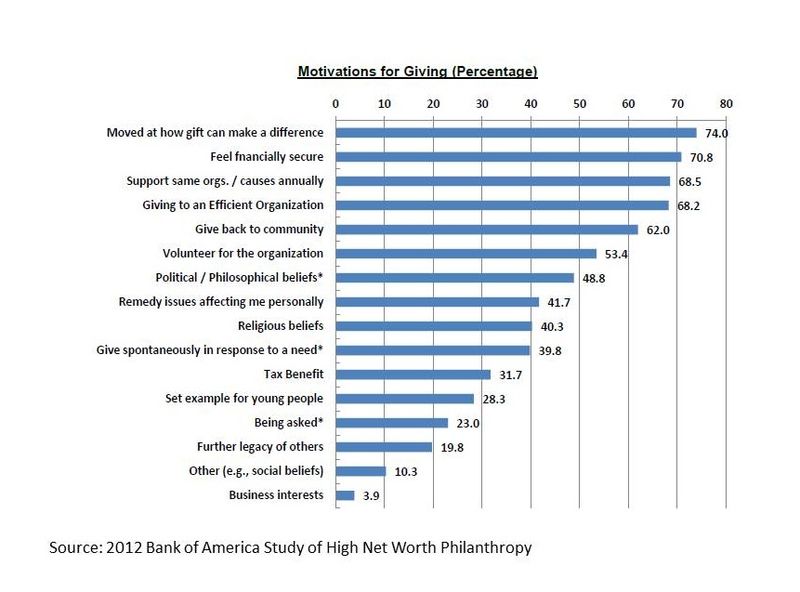 To better understand the role of HNW giving – for 2011 data 70% of the $300 Billion giving was by individuals. Half of these were from HNW donors or they represent over $100 billion of giving a year and at least one-third of total donations in the US. When asked about future giving, these individuals painted a positive outlook in the 2012 survey. Most HNW individuals also increase their giving for the giving season.

Keep in mind that HNW donors are discerning donors with financial advisers, lawyers who also advise them. Larger non-profits tend to have "Major Gift Officers" who  work with HNW donors as well. Going by Eric von Hippel's Lead User idea, HNW donors motivations of giving does provide a window to donation behavior of the numerous small donors who make up over $200 Billion of annual giving in the US. Many of these large numbers of donors will donate online in 2014.

This summer, Non-Profits should try and articulate at least one thing from the  graphic above. Our favorite is:

And incidentally, a narrow focus hugely helps with the Internet- whether it is organic search and SEO or advertising via PPC like Google AdWords. Contact StratoServe.