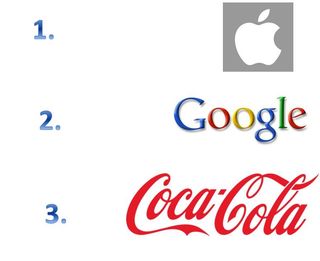 As a Coca Cola  fan this blog feels bad that the Coca Cola brand has slipped to the no. 3 spot in the 2013 Interbrand rankings after reigning for 13 years as the top brand in the world. If you think about it , it is in these 13 years that the Internet has taken off and with it, the mobile smart phone (yes the Apple iPhone) and the ubiquitous Google that serves as the great equalizer for anyone with access to the Internet. Interbrand has ranked Apple as no. 1 and Google as no. 2  in this new age and we feel that that Google should be probably ranked No. 1  (full disclosure: StratoServe is a  Google Partner) but perhaps this has something to do with the Interbrand ranking methodology which is as follows.

Given the huge focus on profits that relate to the brand one can understand why Apple is no. 1. Notably the Mac grew at 15% when other PC makers struggled at 3% growth. In addition, the excitement around the iPhone has helped the business of wireless carriers like AT&T a great deal.

Our reason for supporting Google as no. 1 brand is based on its availability to everyone with Internet access and that it  touches far more lives, worldwide,  than Apple. You can use Google for free and it's absolutely a game changer in the information and knowledge age. Although Google does access your behavior data for tailoring Ads and content, it does not seem to be a big price given that the content is great and always getting better. iPhone and Macs have their own ecosystem and unless you buy the hardware you are excluded from the Apple magic except for iTunes.  A bit like Coca Cola that you have to buy. To Coke's credit,  it's hard to be the top Global Brand  if you have 3000 brands that are not called Coca Cola.  And you are competing with trucks for distribution of Coca Cola while Apple and Google  use Wireless and the Internet.

Whether or not you agree that Google should be the no. 1 brand, the fact is that technology , Internet and mobile has taken over the top two brand spots and that is a sign of changed times for brands and branding. Contact StratoServe.